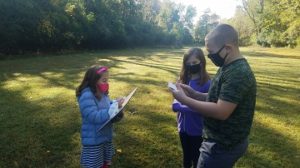 This week on Monday , we got our first guest speaker! Their names were Mr. Nathan and Miss Diana. They taught us about the black swamp, and how people’s wagons would get stuck in the mud, and that how high the moss is at the bottom of the tree proves how much water there was. They also told us that the mud was so black, and that there was no sunlight because of all the trees it looked black. That might have been why they called it black swamp. Mr. Dave gave us a lesson on early life and the tools they used. Like the scraped the ends of a rock so it would be sharp ,maybe to rip the hide of an animal. He said that one tribe left it there ,and it got covered up by the wind and sand, then another tribe came and did the same. And so on, and on. Last Thursday we had Spanish. We had pretend food and you would have to order in Spanish, and the waitress/waiter would tell him/her what they wanted in Spanish then they would make it. Although we didn’t have Music this week, I’d say it was a good week.