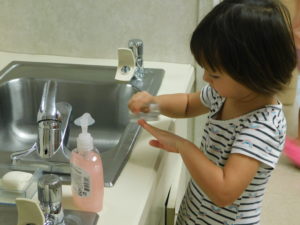 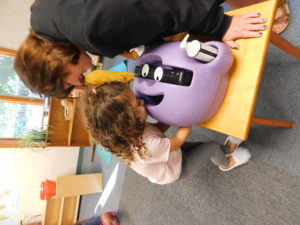 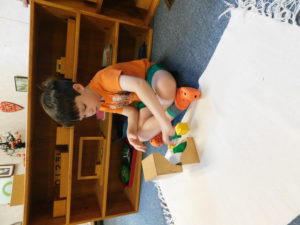 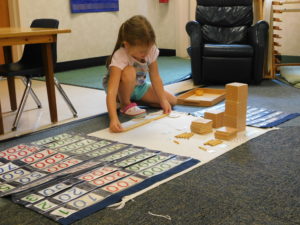 Despite the warmer weather this week, fall is present in the classrooms! Our practical life work has changed to a fall theme as well as some art work like fall doppers and apple trees.

Both classrooms also continued using scissors in the classroom to cut paper, the next skill from cutting clay.
In Sensorial, the West classroom introduced the monomial cube, and the East classroom introduced the geometric solids.
The East classroom also learned how to use a stapler, hot to use a hammer for pounding, explored stringing,  and continued care of the environment by polishing a mirror. The children also worked on their family pictures, thank you for bringing them in!
The West classroom learned how to change a toilet paper roll when empty and continued care of oneself by fingernail scrubbing.  In math, the “memory game” was also shown to reinforce the numbers 0-9. A friend has to keep the numeral in their memory while counting and bringing back the counters. Metal insets were added to the writing shelf as well for tracing.
The medicine ball was added to the movement shelf in both classrooms, a two person movement activity to use coordination and strength to roll the weighted ball back and forth to each other.
0Shares
PrevNext