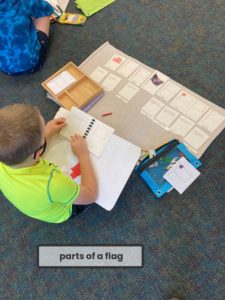 As several weeks have gone by already, the children continue to prosper in the classroom environment and consistently show their love for learning. This week there were new units introduced to the students in culture and in math. For History, students were presented with a lesson on fossils. The fossil unit stems from the Timeline of Life, which was introduced during the Second Great Lesson at the beginning of the year. This History unit offers children the chance to explore and observe a variety of imprints of different creatures/animals.

Another cultural unit introduced was in Geography. This unit encompasses the parts of a flag. Throughout this unit, students are given the chance to gain knowledge about The Pledge of Allegiance, The Star-Spangled Banner, and the history behind the U.S. flag along with the parts of a flag. In addition, children are able to explore different flags from around the world.