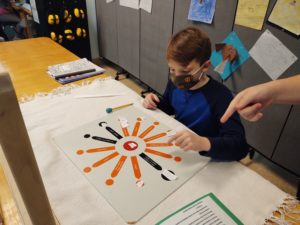 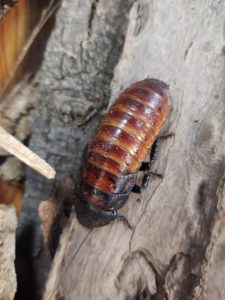 In Upper West, one of our class pets is the Madagascar hissing cockroaches. Like all animals, they reproduce. When Mr. Dave ordered them, he put a little note on the bottom of the paper that they should all be one gender. But they gave him one male and three females. So, of course, they reproduced. Twice! The first time was sometime in September or October. Mr. Dave gave the babies to his friend.

But of course, it happened again. On November 16 we found at least 2 dozen babies! Mr. Dave gave the babies, along with the male adult cockroach this time, to his friend.

In history we’ve been learning about early humans.  So far, we’ve done Ardipithecus, Australopithecus, and Homo Erectus. I thought all the lessons were fascinating. We’re still aren’t at the end of the human timeline, which means there are more early humans to go through. We can’t do all of them, that would probably take the whole school year! Mr. Dave has been doing all of the lessons. He has been showing us charts, and the whole point of this unit is to find out our closest fossil relative. We’re all looking forward to the next lesson!