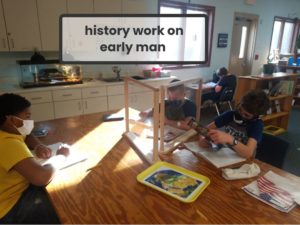 On Monday we had a History lesson. It was on the Homo Erectus. They were the first animals to control fire. So far of all of our history  lessons it is our closest extinct relative. In Collaborative Science we learned about profile maps, and we drew them. On Wednesday we were supposed to have art but Miss Sam had to stay home with Walter, so we are having a make up today (Thursday). And today we usually have Spanish but Miss Clementina could not be here either. So we are going to make cards for her. In P.E. we played a new game. It’s where there are two defenders, and Mr. Tim would throw the football to you and you would have to get past the defenders without them pulling you flags ( kind of like Flag football) Although Miss Clementina was not here I would say it was good.