On Thursday morning, we ventured to Fremont, Ohio to tour the museum and grounds of the Rutherford B. Hayes Memorial.  We had a wonderful time learning about our 19th President.  We learned about Albert Bierstadt: an artist who was a friend of President Hayes and his wife Lucy.  He worked quite a bit with symmetrical art.  We then were able to do an activity that Bierstadt had done with Lucy at the White House when he visited them.  The weather cooperated so we could also tour the Spiegel Grove.  There we were able to see President and Mrs. Hayes, their son and daughter in-law, and his trusty horse “Old Whitey’s” grave site.  The tour continued into the museum where we learned more about Rutherford B. Hayes and how his family came to live in Ohio from Vermont.  We learned of his time as a veteran in the Civil War, his marriage to Lucy B. (Webb) Hayes, and the various stories that go along with his presidency.  We encourage you to visit the Memorial as a family.  You will want to add the house to your tour as we did not have enough time to visit there. 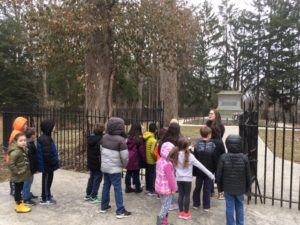 The grave site for President Rutherford B. and Mrs. Hayes and family.

Our butterfly artwork inspired by Albert Bierstadt and Lucy Hayes.

The original artwork done by Bierstadt and Lucy Hayes at the White House.

Have a wonderful weekend,