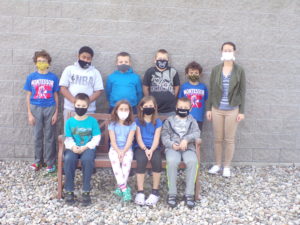 On Friday, everyone got their first lesson on geometry. On Monday it was the international day of peace so the week before on Wednesday in music we made something to go on the video, everyone else did something too. We also put up our peace pinwheels. On Tuesday we also did some more with stream tables, we poured water on it to see how it formed, and then we got to hold a Q-tip that was dipped in blue food dye, so when it came out it was blue. On Wednesday we also made another thing where you pretty much traced a pattern in art, and for P.E we finally played a game of sideline soccer, and we also played sharks and minnows. Today the question of the day was if you could go anywhere where would it be?